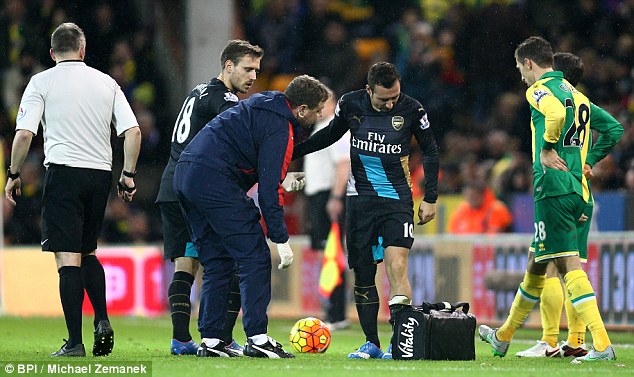 Many Arsenal fans had been buoyed by the potential return of Santi Cazorla this month but in yesterday's pressy, Wenger revealed that there has been an adverse reaction to the rehab sessions.

Wenger has suggested that Cazorla's original knee injury has responded well to the treatment, but extra stress on the midfielder's achilles has resulting in extensive swelling and subsequently the removal of impact exercises in the recovery schedule.

Wenger hasn't explicitly said that Cazorla is done for the season but with this latest setback, its hard to see Cazorla in full training any time soon. Moreover with every point now being of paramount importance its unlikely that he would risk a half fit midfielder in the crunch games towards the sharp end of the season.

It also bad news for any dugoutfc.commanagers who might have taken a gamble on his March return. *Cough* Chris *Cough*.