Theo Walcott celebrates a decade at Arsenal by captaining the team 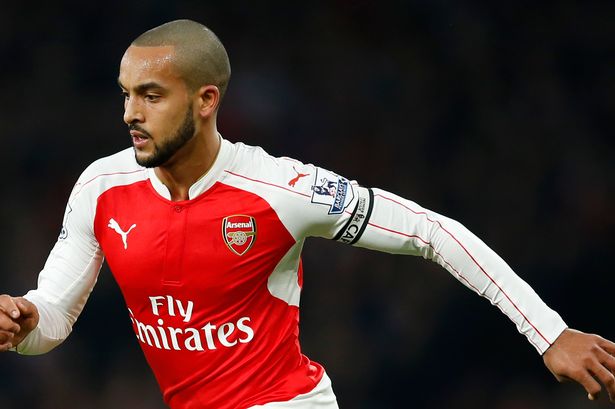 Theo walcott was handed the armband against Chelsea at the weekend in a strange but sentimental decision from the team. Walcott was originally only supposed to lead the team out as a tribute, however, Per Mertesacker, in a wave of sentiment rarely seen from the lumbering German centre back, handed the captain’s armband to him for the match. He then removed all hope of taking it back at half time by earning himself an early bath for his challenge on Diego Costa.

In his 10 years at the club, Walcott has been in and out of the first team. He seems now to have cemented a regular spot in the first team (when he’s fit) with his performances over the last few seasons and has notched 3 goals and 2 assists in 17 games played so far this season.

Still, the decision to make Theo captain at the weekend received mixed reviews from the fans, especially after the damaging loss to a team that has so often been their downfall.

Did #Walcott REALLY get the captain's armband because he signed on this day ten years ago?

Didn't even notice #Walcott has the armband today. Pretty much anyone else would be a better option. #ARSCHE #PremierLeague

Did #Walcott REALLY get the captain's armband because he signed on this day ten years ago?

And they had a point, on the pitch against chelsea he was pretty much anonymous, completing 18 passes, creating no chances and no shots on goal. Should he have stayed on the pitch instead of Giroud with stats like that? I think had he not been wearing the captain’s armband, he surely wouldn’t have.